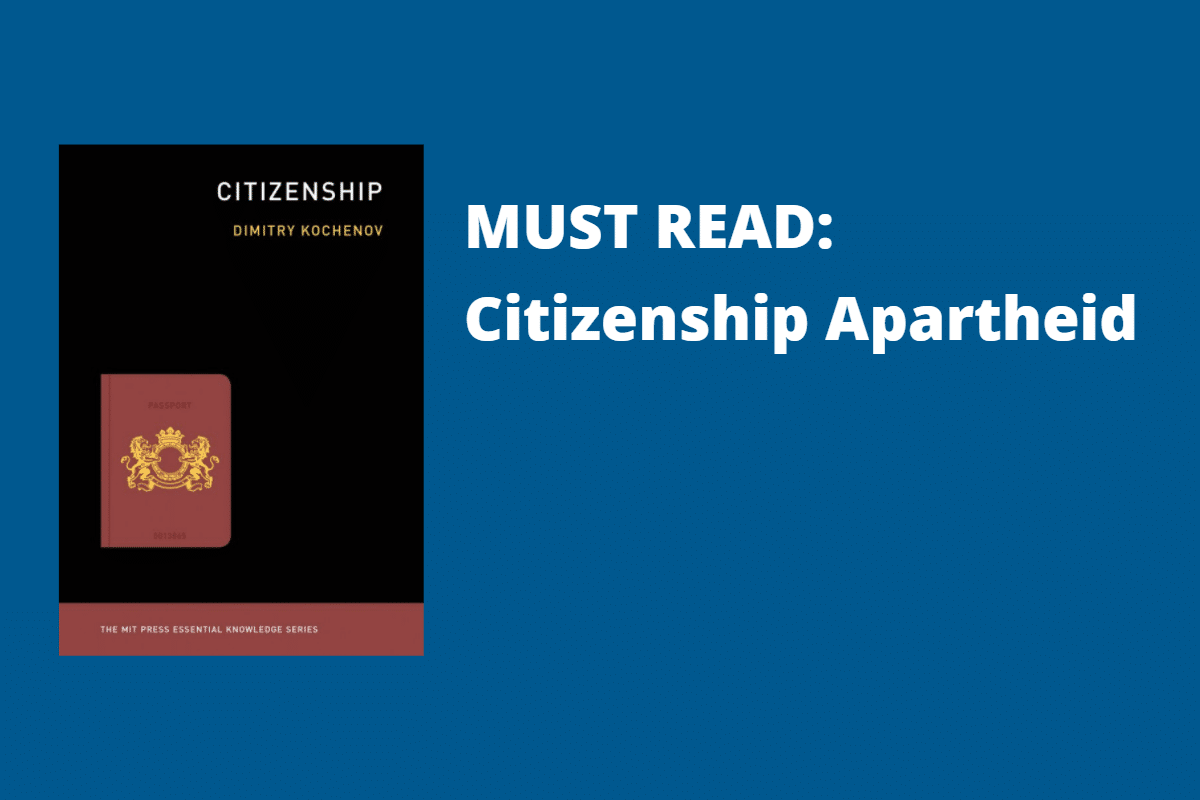 The article was written by Prof. Dimitry Kochenov

We live in a world of passport apartheid and its key tool – citizenship – has been very effective in its mission to exclude its victims, argues Prof. Dimitry Kochenov in his book ‘Citizenship’.

Victims of citizenship
Indeed, citizenship is a very unlikely concept to glorify: Its only purpose is to divide the world and appear unquestionable and ‘natural’ in the face of the most obvious criticism. Its distribution around the world is entirely random and totalitarian: One is a citizen purely on the strength of having been assigned to a particular citizenship by an authority — an authority that brooks no dissent, should you claim to not belong. Your agreement is not necessary and your protests are of no avail, yet everything about you — from life expectancy to your income and basic freedoms inside and outside the assigning state the world over — is in direct correlation with this congenital assignment, in which you can neither participate nor refuse in the majority of cases. The majority of the world’s population consists of ‘victims of citizenship’. The citizenship they know has nothing to do with the glorious ideals described in political science textbooks, but is instead a randomly distributed penal status of privation and exclusion from dignity.

In my book ‘Citizenship’ (MIT Press, 2019), I demonstrate that citizenship’s generally positive image has little to do with the reality on the ground and the causes of this deep disconnect are not difficult to uncover. Long overdue is criticism of the liberal nationalist traditions inspiring the popular visions of citizenship today — either explicitly or implicitly. The most frequent mistake in approaching citizenship is ignoring the importance of the legal status at the heart of this concept. Underplaying it misrepresents all the essential characteristics of citizenship entirely. Once the status and the rules for its assignment are placed at the centre of the citizenship story, the multitude of citizenships around the world and the strict boundaries between them naturally become the focal point of discussion, making myopic confocal misrepresentations very difficult, if not impossible.

This is the context in which we suddenly become able to discover that citizenship is under tremendous pressure, which could in theory endanger the concept’s very survival. Contemporary law and politics are built on the ethical base of equal human worth and the idea of deserving and achievement: The world has officially moved far away from the caste structures of the past. Children in every school are taught to realise their potential by studying hard and taking their future into their own hands. The core idea of fairness informing the contemporary understanding of law and politics is inspired by Enlightenment reason and is centred on the belief that the individual is in charge and the authority is able and willing to back its decisions with recourse to valid reasons and clear arguments.

Abstract totalitarian status
Tragically for citizenship, any appeal to this concept is nothing but shorthand for the denial of all such foundational positions. Worse still, adapting its essence so that contemporary fairness can be incorporated into the story of citizenship is absolutely impossible. Citizenship is precisely about mass caste assignments in a context where individual agency and all the personal characteristics of the bearers are dismissed by definition. It is an abstract totalitarian status struggling to survive in a world where all it has ever cherished and promoted is untenable in principle even if it survives in practice, once it is taken beyond the context of a particular group endowed with the same status. As the realisation of this simple fact grows, the prestige of citizenship is bound to diminish very steeply.

Disparity in the rules
Citizenship is at a crossroads now: the sub-standard dominant narrative that the global equality of human beings can be assured within states is in reality eroding. Different citizenships are not equal, and the allocation of citizenship rights worldwide is neither logical nor clear. At the macro level, citizenship enables the perpetuation of rigid pre-modern caste structures. The son of an American is an American, and the son of a brahman is a brahman. We do not ask ourselves whether this is just.

Examples of this disparity in the rules of citizenship are countless: what is taken for granted as best practice in one country can seem almost outrageous in another. But the contradictions should point us to the bigger problem with citizenship: there cannot be a ‘worse’ or a ‘better’ method of assignment to a caste. Any caste system depends on repugnant assumptions and should be intolerable, at least in modern democracies. Yes, this is the basis for what citizenship is about.

To act against this status quo is usually a crime. Harsh punishment awaits those prioritising the reality of their disenfranchisement and exclusion from opportunity over the textbook neatness of justification of random privilege enjoyed by others, not them. Citizenship apartheid makes sure that an attempt by a victim of citizenship to improve her inequitable situation is frowned upon as an act of rebellion against the ‘natural order of things’. ‘Citizenship is not for sale’ is an example of precisely this kind of supremacist logic.