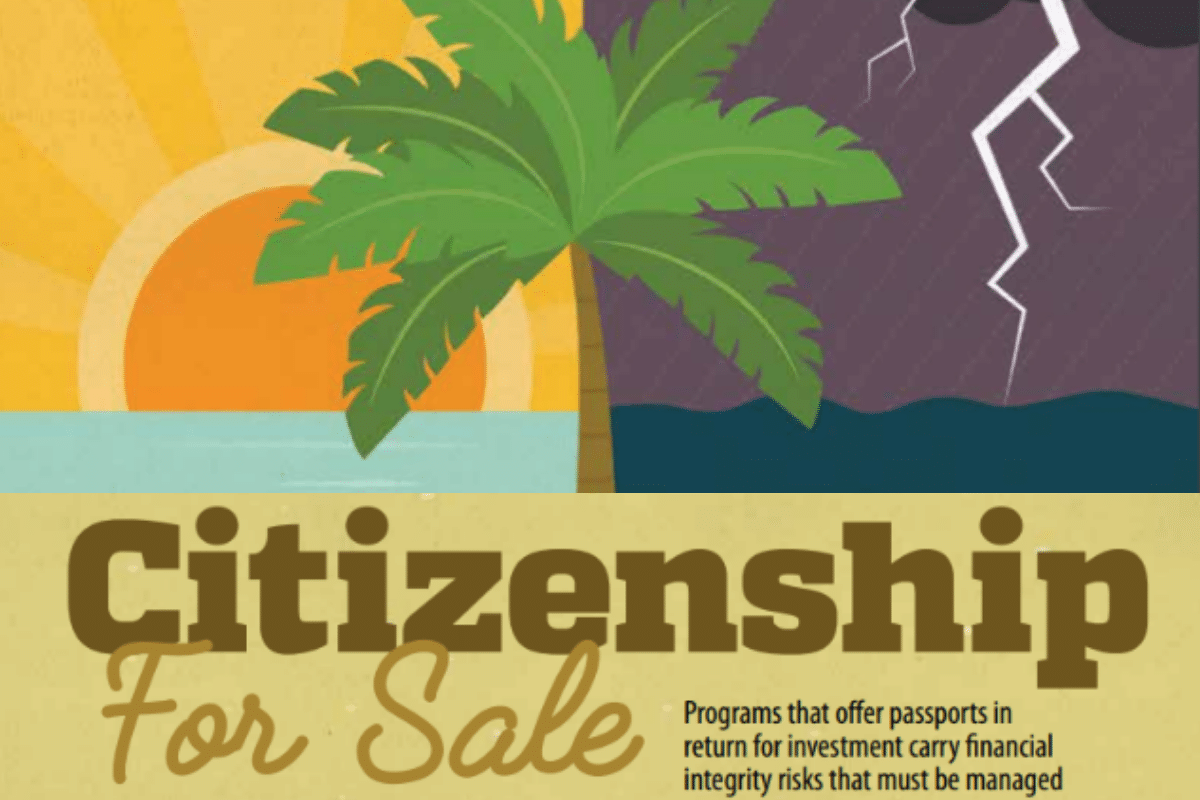 Authors: FRANCISCA FERNANDO and JONATHAN PAMPOLINA are counsels and ROBIN SYKES is a senior counsel in the IMF’s Legal Department

As countries closed their borders to slow the spread of COVID-19, a second passport became an ever-more-desirable commodity, for those who could afford it. While not a new phenomenon—several countries have adopted “golden passport” programs over the years—the onset of the pandemic generated renewed interest. Price tags for a second citizenship—sometimes in only 30 days—range from $100,000 to $2.5 million. Antigua and Barbuda, Cyprus, Grenada, Jordan, Malta, St Kitts and Nevis, and Vanuatu are among the many countries that have offered such deals.

There are few figures about the trade in passports given the overall opacity of these programs. Nevertheless, firms that offer such services reported increasing demand for second passports in the midst of the pandemic. Requests from high-net-worth individuals in advanced economies have skyrocketed. The demand has been further fuelled by discounts offered by some countries.

A second passport has many benefits, such as the ability to travel freely without visas and flee political persecution, conflict, or civil unrest. It can offer attractive tax and wealth management benefits, too. Usually citizens from autocratic countries, where the rule of law is weak, are the most anxious to obtain a golden passport.

But as the coronavirus threatened to overwhelm health services before vaccines became available, wealthy individuals from developed democracies also looked for an escape route. For countries seeking to rebuild pandemic-stricken economies, the sale of passports can seem an easy way to secure revenue and investment. In the past, such arrangements have generated large inflows, which can have a significant economic and fiscal impact—consider, for example, revenue generated by such programs in the Caribbean (see IMF Working Paper No. 20/8). Some countries have used these programs to replenish their coffers after natural disasters (for example, a decline in tax revenue after Hurricane Maria hit Dominica was partly offset by golden passport revenue).

What are golden passports?

Administration: Typically, a government agency oversees the program, and may rely on third parties to market the program, facilitate application submissions, and carry out due diligence. Some programs have statutory quotas that limit the number of applications.

Ultimately the bestowal of citizenship is a government’s sovereign decision. However, the risks of selling citizenship can be high. Abuses are widely documented, including enabling corruption, money laundering, tax evasion, and other crimes. If the risks are not properly managed, countries that offer these programs can suffer reputational damage, affecting their economic and financial stability and worsening inequality.

New citizenship can disguise a higher risk profile. Criminals and terrorists may shop around for a country that offers a safe haven from law enforcement or extradition. They might hide behind alternative identities to gain access to financial products or evade sanctions and watch lists. They could use secondary citizenship to conceal a bank account that would otherwise require declaration under international tax rules, or they might seek citizenship in a country that has not agreed to such tax information exchange.

The risks from these programs can spill over to other countries, too. Members of organized crime may use their newly acquired passports to move freely between countries and establish illegal enterprises. The European Commission has launched legal proceedings against two member states (Cyprus and Malta) for offering golden passports to people without a “genuine link” to the bloc; it says they threaten the integrity of EU citizenship as a whole, since a citizen of one EU member state has the right to move, live, and work freely in the other 26 members.

Citizenship by investment can lead to corruption and rent-seeking. Without proper oversight, public officials may accept bribes or pocket the fees. Programs linked to specific sectors can cause overdependence that leads to economic imbalances. Some countries, for example, offer citizenship to investors who purchase an expensive property. Foreign money can drive up local property prices and give rise to real estate bubbles.

In reaction to countries that sell passports without proper vetting, other governments may respond with countermeasures such as enhanced checking of regular passport holders from these countries. In some cases, countries could be labeled as high risk. The Organisation for Economic Co-operation and Development, for instance, publishes a list of high-risk programs it suspects allow people to hide their taxable assets abroad. Foreign banks can react to these negative risk perceptions, putting pressure on correspondent banking relationships. This can have far-reaching implications for financial stability.

The IMF is working with members on policy advice to highlight the risks of these arrangements, with an eye to properly balancing risks and benefits and avoiding a long-term negative economic impact. For example, the IMF has advised members on the financial integrity risks of such current and past programs in Article IV consultations for Comoros, Cyprus, Dominica, Grenada, Malta, St. Kitts and Nevis, and St. Lucia. More broadly,

Countries should clearly understand the risks. Before launching or continuing with citizenship-by-investment programs, authorities should carefully assess the costs and benefits, including their own capacity to manage the financial integrity risks. Are the application, monitoring, and revocation procedures robust? How effective are the supporting mutual legal assistance, tax information exchange, and anti-money-laundering and counter-terrorism-financing frameworks? Such risk assessments should be ongoing to respond to changes in the environment.

Authorities should ensure that there is robust vetting of applicants. Government agencies or third parties responsible for processing golden passport applications should carry out rigorous background checks on an ongoing basis, including by checking with the home authorities of applicants and consulting databases of sanctioned and politically exposed persons. Agents who handle applications must exercise appropriate due diligence regarding their clients, establish the legitimacy of their sources of wealth and income, and report suspicious activity. Applicants should not be admitted without thorough vetting. All sectors and agents involved should be supervised for compliance with anti-money-laundering and counter-terrorism-financing requirements.

Authorities should consider enhanced measures for transparency and oversight. One way to do this is to publish the names of successful applicants. This can in turn be useful for banks and other businesses when they need to conduct due diligence on their clients and for authorities carrying out investigations. Another way is to ensure that the passport and other citizenship documents issued indicate that these are golden passports. Authorities should also consider periodic public audits to ensure that the proceeds of the program are used for their intended purposes.

Countries could consider a regional approach to level the playing field. A coordinated approach among countries with golden passport programs can help discourage criminals from shopping around for citizenship and prevent a race to the bottom. Effective arrangements for information sharing, standardizing best practices, and enhancing the transparency of the processes for granting (and revoking) citizenship can strengthen safeguard mechanisms. Pooling of resources can reduce costs and establish consistent regional due diligence, monitoring, and enforcement practices.

Golden passports grant all the privileges of a country’s citizenship. Ultimately, the decision to grant citizenship is up to each country. Yet citizenship and its attendant benefits should be zealously safeguarded, given the financial and reputational risks when such a precious commodity is bestowed unwisely. Countries should take the time to consider whether the costs of giving noncitizens a second passport really do outweigh the benefits. In some cases, they may not.